E-Levy: 8 out of 10 Ghanaians have changed MoMo transaction behavior – Study

We know nothing about National Cathedral – Catholic Bishops’ Conference

The Ministry of Youth and Sports has directed the Ghana Football Association to reconstitute the Black Stars’ technical team, led by coach Milovan Rajevac.

The directive was the outcome of an emergency meeting held on Friday, January 21, 2022 follow the team’s abysmal performance at the ongoing 2021 AFCON.

Black Stars failed to qualify to the round of 16 after losing 3-2 to Comoros.

An earlier release by the ministry registered the country’s disappointment after immense resources were made available to the squad “logistically and financially.”

In Friday’s release signed by the sector minister, Mustapha Ussif, it stated that, “the people of Ghana have lost confidence in the capacity of the current technical team of the Black Stars to deliver success.”

“The Ministry, therefore, asked the GFA to review the work and capacity of the Black Stars’ technical team led by the head coach, Milovan Rajevac.”

Sports enthusiasts and stakeholders have been calling for coach Milo’s dismissal and shake up in the GFA since the Stars’ early exit from the tournament.

Find below a copy of the statement: 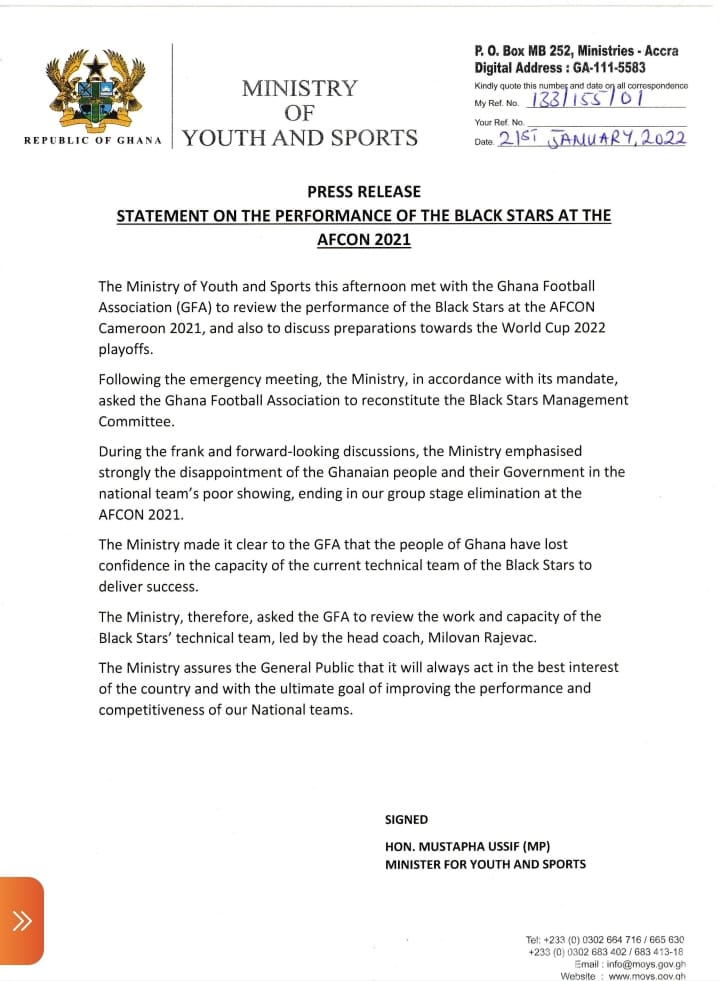 National Cathedral: Lies are being told to cause disaffection – John Kumah

Deputy Finance Minister, Dr. John Kumah says the various criticisms against the National Cathedral have been orchestrated to cause...
News

Prospects for remittances to emerging markets amid rising inflation

ABOUT US
ABC News Ghana is an investigative media house that focuses on politics, sports and the economy. Our work is thoroughly researched, balanced and fair. Our vision is to become the most preferred indigenous news brand for people in West Africa.
Contact: [email protected]
FOLLOW US
© 2020. Abc News Ghana. All Rights Reserved.
This website uses cookies to improve your experience. We'll assume you're ok with this, but you can opt-out if you wish.Accept Read More
Privacy & Cookies Policy