A Broadcast Journalist with the Multimedia Group, Latif Iddrisu has had his fair share of stigmatization after coming into...
Read more

It’s not easy working for the ignorant and ungrateful – Prof. Frimpong Boateng

The Yaa Ansaa Royal Family of Akwamu in the Asuogyaman District of the Eastern Region has appealed to the...
Read more

Canadian Prime Minister, Justin Trudeau has retained power in the federal election held on October 21 but his Liberal Party lost the majority seat in the country’s legislative body, ABC News can report.

According to a BBC report, Mr. Trudeau’s Liberals won 157 seats instead of the 170 needed to form a majority in parliament.

A separate report from British’s Daily Newspaper, the Guardian, indicates that Prime Minister Trudeau’s election result was better than feared amongst political commentators owing to several scandals, one involving interference in a court case and another involving him wearing racist costumes in the past.

Below is an analysis of the election results:

Reacting to his re-election, Mr. Trudeau wrote on his Twitter handle, “Thank you, Canada, for putting your trust in our team and for having faith in us to move this country in the right direction.”

Although he will have to be Prime Minister of a minority government, Justin Trudeau noted that “Regardless of how you cast your vote, our team will work hard for all Canadians.” 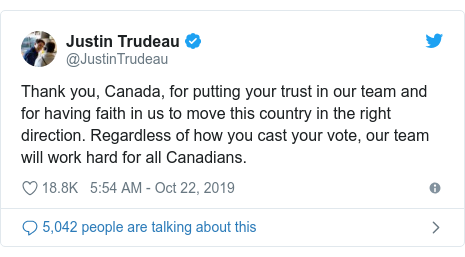 Several world leaders, including American President, Donald Trump and UK Prime Minister, Boris Johnson all congratulated the Canadian Prime Minister on his re-election in the early hours of Tuesday, October 22.

Congratulations to @JustinTrudeau on a wonderful and hard fought victory. Canada is well served. I look forward to working with you toward the betterment of both of our countries!

“Congratulations @JustinTrudeau on your re-election. As Commonwealth, NATO, and Five Eyes partners the UK and Canada share history and values and I look forward to continuing to work with you on priorities such as girls’ education and climate change.” – PM @BorisJohnson 🇬🇧🇨🇦

Submit your stories or articles to newsroom@abcnewsgh.com or Whatsapp them to +233 553620623

To hold a position in Parliament, especially on the Health Committee, is not by accident or a mistake.  Even...
Read more
Politics

Our phenomenal record being touted the world over – Dr Bawumia boasts

Vice President Dr Mahamudu Bawumia has taken pride in what he describes as a “phenomenal” record of the Akufo-Addo-led Administration even before the expiration...
Read more
News

Elizabeth Asantewaa, woke up some 58 years ago, beaming with smiles. Her task that day, was to welcome and present to Ghana's first President,...
Read more
News

Savannah is the newest region to record its first case of the novel coronavirus. According to the Ghana Health Service, the Regional Health Directorate embarked...
Read more
Sports

Former head coach of Kumasi Asante Kotoko, Coach Bashir Hayford has revealed why there is a mad rush by coaches in the country for...
Read more

US: Trump directs Governors to re-open churches, mosques; describes them as essential services

Churches and mosques in the United States of America are expected to open this weekend following a directive by President Donald Trump to Governors...
Read more

South Africa has recorded its first neonatal coronavirus death after a two-day-old baby succumbed to the disease on Wednesday, May 20, 2020. According to the...
Read more

In the wake of the novel coronavirus pandemic, many countries have resorted to the use of modern technology in different forms to fight the...
Read more

COVID-19: Loss of taste and smell added to list of symptoms

Loss of taste and smell have been added to the official list of symptoms of COVID-19. Medically known as anosmia, this will now be included...
Read more

ABOUT US
ABC News Ghana is an investigative media house that focuses on politics, sports and the economy. Our work is thoroughly researched, balanced and fair. Our vision is to become the most preferred indigenous news brand for people in West Africa.
Contact: info@abcnewsgh.com
FOLLOW US
© 2020. Abc News Ghana. All Rights Reserved.
This website uses cookies to improve your experience. We'll assume you're ok with this, but you can opt-out if you wish.Accept Read More
Privacy & Cookies Policy

Any cookies that may not be particularly necessary for the website to function and is used specifically to collect user personal data via analytics, ads, other embedded contents are termed as non-necessary cookies. It is mandatory to procure user consent prior to running these cookies on your website.